The process of anaerobic digestion (AD) of organic matter produces biogas. It mainly consists of methane (50-70%), carbon dioxide and a small amount of mixed gases including hydrogen sulphide. It is a renewable gas which gives a lot of flexibility for utilisation. Using combined heat and power engines (CHP), it burns to produce renewable electricity and heat. Alternatively, certain technologies can purify it by removing the carbon dioxide and other gases. This is known as biogas upgrading and the resulting gas is called biomethane which has multiple valuable uses. Thereafter, it can be injected into the gas grid or used as transportation fuel. As such, biomethane is one of the most important biofuels for our green future. Biogas production is truly vital to our future circular economy.

Anaerobic digestion is an environmentally-friendly, cost effective solution to process virtually all types of organic waste. These include food waste, farm waste (manures, slurries, etc.), food and drink production waste, garden waste and more. Furthermore, many farmers grow energy crops, such as energy maize and hybrid rye, specifically for AD. Some of them are break crops which grow in-between standard food crop cycles. This enables farmers to utilise their land during void periods, produce valuable crops which earn them income, improve soil condition and at the same time contribute to renewable development.

What Happens to Organic Waste?

At present most organic waste worldwide ends up in landfill sites. There, it subsequently decomposes and produces methane which escapes into the atmosphere causing vast pollution. Methane is an extremely potent gas which causes 30 times more pollution than an equivalent amount of carbon dioxide (CO2) as it can trap heat much more effectively. In addition, organic waste at landfills also generates leachate (wastewater) which presents many challenges. In many parts of the world landfills have no leachate containment measures. As a result, leachate drains freely into natural rivers and lakes causing severe water pollution.

More recently, mixed municipal solid waste (MSW), which includes organic waste, has been sent to incineration plants (the most common type of energy from waste plants). Incineration produces electricity and heat. Though effective for diversion from landfill, it is not a particularly efficient and environmentally-friendly method of processing organic waste.

When organic waste is relatively pure or can be separated from mixed waste, anaerobic digestion is regarded by most as the best processing method. Biogas plants extract the energy content by converting it to useful biogas. Unlike other renewable technologies, such as wind and solar, biogas production is very efficient and also allows energy storage. Combined heat and power (CHP) engines can burn it straight away to produce renewable electricity and heat in a balanced way (not intermittent). Alternatively, upgrading it to biomethane (virtually pure methane) also allows energy storage, transportation and usage where and when necessary. Biomethane is useful in both gaseous and liquid form. It has similar properties to natural gas but it is a clean renewable biofuel. It has numerous benefits and plays an important part in making both gas grids and the transportation sector greener.

In addition to generating renewable energy, the by-product of the biogas production process is known as digestate. It is a nutrient rich natural fertiliser with numerous proven benefits for farming. Digestate replaces traditional chemical fertilisers, thus it saves costs to farmers and reduces pollution. As such, AD is effectively a zero to waste solution for organic waste. 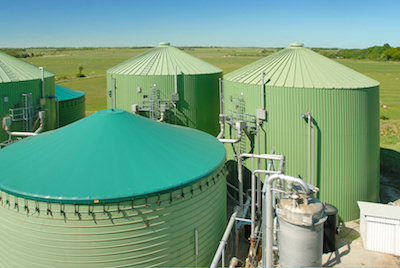 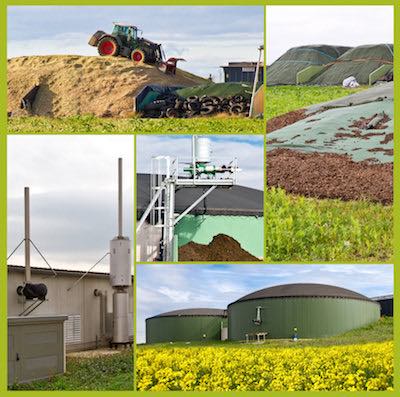 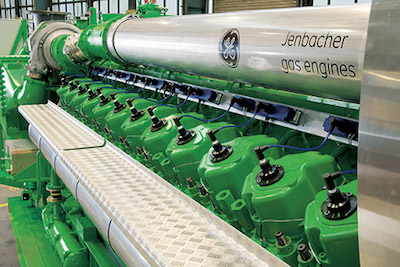 How Envitech Can Help You

At Envitech International, we have extensive expertise in biogas production and technologies. We work with some of the leading technology providers covering the wide spectrum of technological processes. Our select technologies include wet-AD and dry-AD, mesophilic and thermophilic plants for processing all kinds of organic waste. We can assist from agricultural farm based plants to food waste and highly complex mix of wastes from multiple sources. In addition, we also cover the complex field of biogas upgrading in order to produce biomethane. Our extensive knowledge of the different upgrading technologies, from membrane to water and amine scrubbing and more, enables us to design and implement appropriate systems matching the needs of each individual project case.

We can consult on the various stages of development and operation or act as complete turnkey developer, managing entire biogas projects from initial feasibility and planning to start up and subsequent operation. We take all particulars of each case into account from organic feedstocks, to site location, appropriate technologies and site layout as well as energy and digestate utilisation. Feel free to contact us to discuss your project needs. We operate in multiple countries internationally and we are certain to create a biogas plant solution that is amongst the most efficient and cost-effective on the market. You can also continue reading this page to find out more about biogas production. 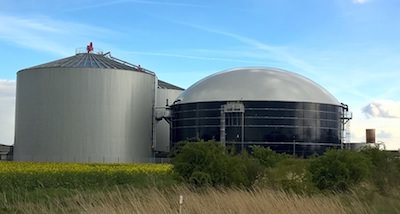 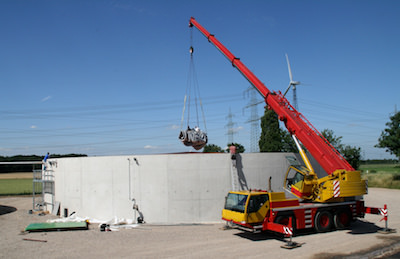 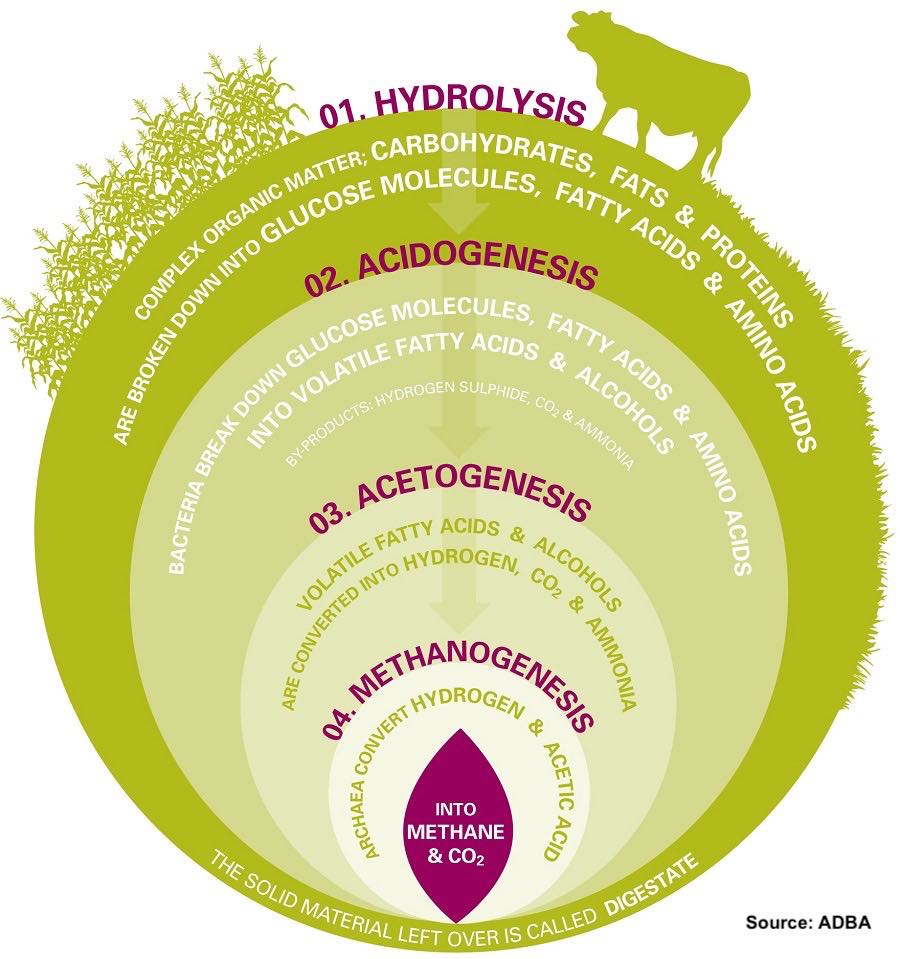 The AD process is a natural process with four stages. Each stage breaks down the organic matter into smaller parts.

Anaerobic digestion plants for production of biogas come in different shapes and sizes. The components typically include feeding and pre-treatment systems, digesters (where the AD process occurs), digestate storage tanks as well as a CHP engine or a biomethane plant to generate energy. There are also gas cleaning systems to remove harmful gases such as hydrogen sulphide (e.g. activated carbon scrubbing).

Different AD technologies exist, though the overall principle is the same. It is highly complex but in essence it includes the following:

In general, biogas technologies are split into two categories – wet and dry. The difference is mainly the percentage dry matter present in the digesters, hence the names. This in turn affects the entire process.

Most of the operational biogas production plants are wet-AD plants. Typically, digesters operate with very low solid content (usually 8-10%). As such, depending on the feedstocks, considerable dilution with water or other appropriate liquid wastes could be necessary. Though there are multiple options, the most common is Continuous Stirred-Tank Reactor (CSTR) digesters. As the name suggests this involves internal mixing systems which continuously stir all the contents inside the digesters to ensure optimum digestion and biogas generation from the organic matter. The low solid content enables efficient mixing.

Digester tanks have varying proportions, though they are usually wider than taller. Some have 1:1 aspect ratio of base diameter and height. In addition, plants operate either mesophilic or thermophilic processes and there are leading technology suppliers which are experts in each. Thermophilic plants produce biogas quicker and require less residence time for the organic matter. Due to this, for a given volume of waste, they tend to have a smaller footprint than mesophilic plants.

Wet-AD plants are ideal for agricultural plants where typically the feedstock mix includes manures and slurries in addition to crops and other residues. The digestate from these plants is also very liquid and large plants require substantial farm land to spread it as fertiliser unless digestate drying is planned. This is an important aspect of project planning.

Some biogas plants utilise dry-AD technologies. Typically, they manage considerably larger solid content in the digesters which can be 25-50%. Consequently, they are suitable for food waste and other wastes with high solid content. These plants are also particularly suitable to process the organic fraction of municipal waste in Mechanical Biological Treatment plants (MBT).

Dry-AD plants are usually thermophilic, operating between 50-60°C. There are various technologies to choose from. Some involve vertical taller tanks where waste enters from the top and digestate exits at the bottom. Others use horizontal plug-flow digesters where waste goes in from one end and an agitator mixes it, gradually pushing it to the other end where digestate exits after around 15 days. The major advantage of dry-AD plants is that they cope well with solid wastes and require much less land in order to process large quantities of waste. On the other hand, a drawback for some systems is that less biogas output may be generated from a given amount of waste. This is because mixing is not as effective as in wet-AD plants. 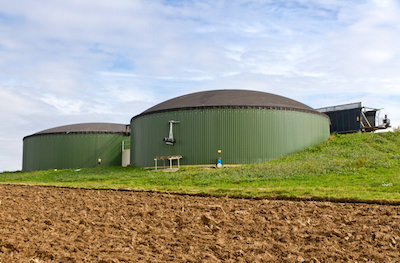 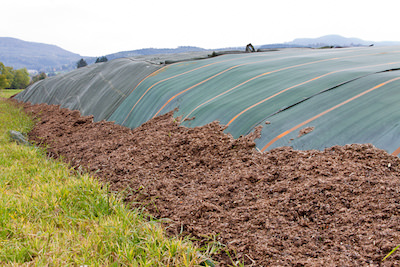 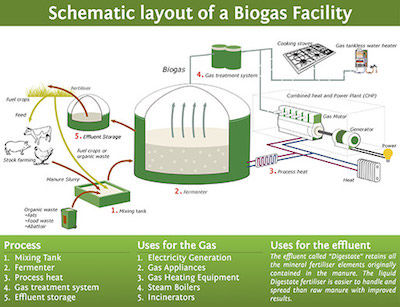 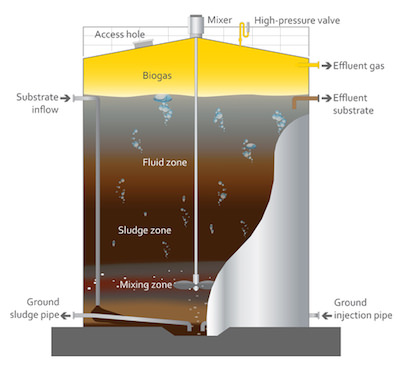 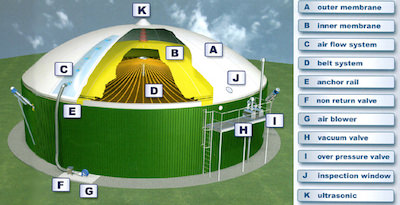 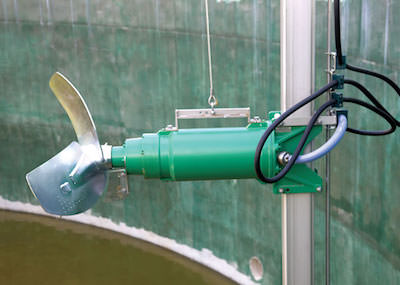 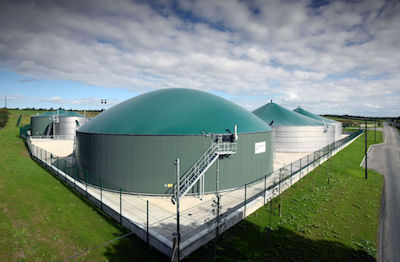 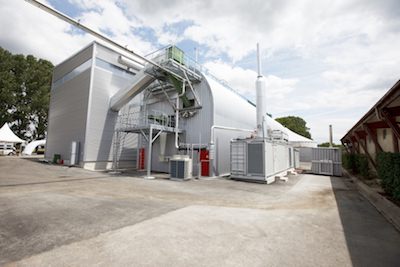 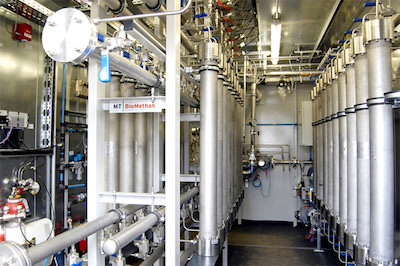 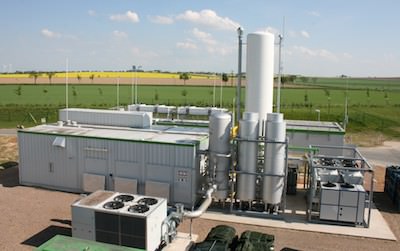 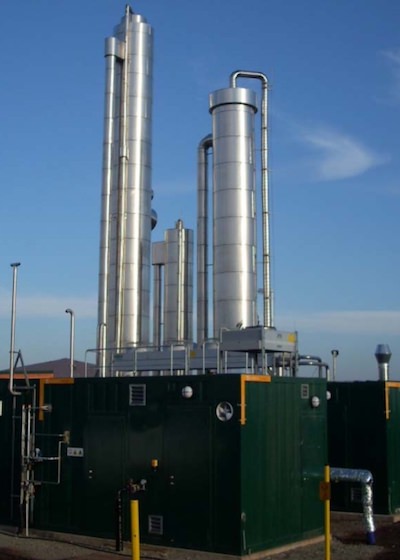 An additional process technology removes all contaminants and virtually all carbon dioxide from biogas. This process is biogas upgrading and it is an alternative to burning through a CHP engine. The result is biomethane gas which typically has over 98% methane content, though it can be as high as 99.9%. Essentially it has similar properties to natural gas and as such injecting it into the gas grid contributes to making the grid greener. Alternatively, liquefying biomethane enables its use as a transportation fuel. In some countries there are already fleets of HGVs and public transport vehicles which operate on biomethane. It is an extremely efficient process which allows biogas to be used where and when needed – something that other much more inefficient renewable sources like wind and solar cannot offer.

There are multiple technologies for biogas upgrading. All have advantages and disadvantages and different ones can be suitable to different project cases depending on local particulars. The most popular ones include:

Biogas production offers numerous benefits. Some of them apply to our society overall and some are specific to farming and the private and public sectors.

Benefits to the Public

Benefits to Municipalities and Governments

You can significantly reduce your waste disposal costs and improve your green credentials. Whether you are a municipality or a business of any scale, we can help you with the right solution. See below for more info.